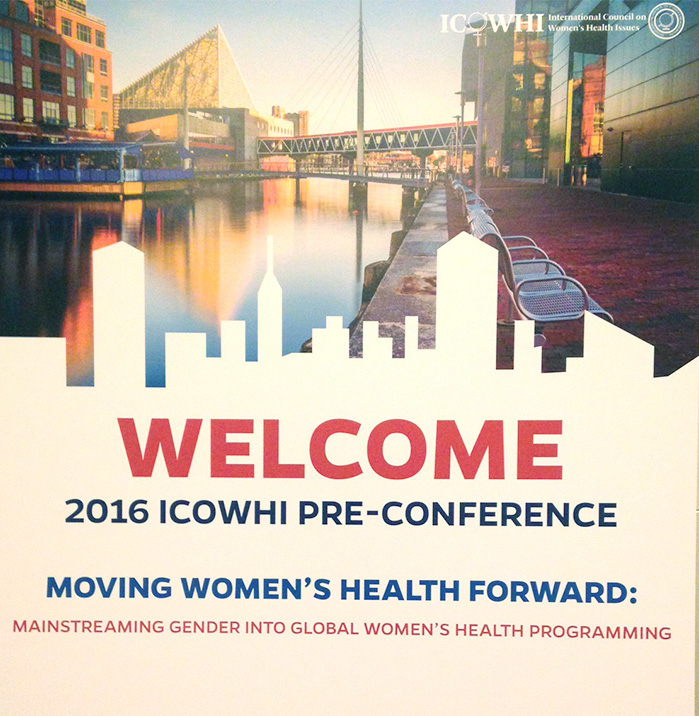 This year’s International Council on Women’s Health Issues (ICOWHI) Congress was preceded by a preconference session that focused on mainstreaming gender into women’s health programming.  Dr. Rosemary Morgan began the discussion introducing the role of gender in women’s health programming and the need for context-embedded approaches.  She stated that while a focus on women’s health is important, it does not necessarily address determinants of gender inequality that perpetuate women and girl’s vulnerability and marginalization, often underestimating ingrained power relations and men’s roles in perpetuating these inequalities. Therefore, within women’s health programming, it is important to recognize that a focus on women’s health is not necessarily a focus on gender. Dr. Jacquelyn Campbell then put gender into the context of gender-based violence, discussing the work of Dr. Lori Heise and the need to think about the role of macro and structural factors in perpetuating and preventing GBV.

Myra Betron introduced us to the concept of gender analysis, systematic way of examining the differences in roles and norms for women and men, and its utility in planning women’s health interventions. In fact, the final part of the pre-conference included an activity where we utilized a gender analysis framework to assess a case study intervention. The intervention was a maternal and child health program that was to take place in Yemen, a country with marked gender differences socially, legally, and economically in particular. We were tasked with assessing the background information provided in order to come up with objectives, activities, and indicators for the intervention. During this activity, I began to realize what a huge impact that men have on women’s health initiatives and interventions. It seems to me that often, the role of men in promoting women’s health is minimized while the empowerment and autonomy of women themselves becomes the main attraction. However, in so many cultures, men are the gatekeepers to health care, transportation, and social activities for their wives and daughters. Who better to be considered in the development of women’s health programs than these very men?

Another example of this was seen in Jane Brown’s discussion of the Go Girl! initiative that she and her colleagues implemented in Botswana, Malawai, and Mozambique. In her presentation she described how fathers who participated in the program felt more comfortable talking with their daughters and reported that their father-daughter relationships had improved since participating in the intervention.  The final presentation of the day included a documentary presented by Dr. Nassim Abdi and Leila Mouri of Docademia.com titled “Troubled Water.” This documentary illustrated the dire situation in Nepal in which the Kathmandu valley is running out of fresh drinking water and the effect that the water scarcity is having on the citizens of the area. After the documentary there was a live Q&A session with the documentary film-maker where we, as a group, were able to discuss the documentary through the lens of gender. It was clear that the women in the community were the ones in charge of finding, collecting, and managing the water supply for their families and this task could monopolize a significant portion of their day. Some women were forced to choose between being home to collect the water that the government provided to them and going to work. This clearly has a significant impact on the health and agency of those women and the health of their families.

The most significant concept that I am bringing home with me today is that there is so much more to gender than just women’s health and that if we work harder to understand gender inequalities and disparities, we will be able to better serve vulnerable populations including women, children, and the members of the vast LGBTQ community who have health disparities that need to be addressed. Furthermore, it is imperative that we work harder to engage men in women’s health and women’s rights especially in their roles as fathers. Personally, I think that a great way to start that discussion is to reframe women’s issues into gender-based issues and to include all forms of gender in the conversation.

Previous articlePaidek receives prestigious 2014 Taylor and Francis Award in Capetown, South Africa recognizing the innovation and importance of Pigs for Peace and Rabbits for Resilience in improving the health of women and girls.
Next article International Council of Women’s Health Issues November 6-9, 2016

RT @JaneCaro: I know I should but I could not care less about the pompous, irrelevant, self interested Australia Club voting to continue to…2 years ago
RT @BronFredericks: IT’S TIME! Today is the 4th anniversary of the #UluruStatement. Check out @ulurustatement & sign up at https://t.co/4kh…2 years ago
RT @womeninGH: Last year only 23% of @WHO delegations to WHA73 were headed by women. This year at #WHA74, we are watching & advocating for…2 years ago